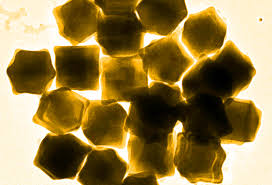 Israeli scientists have invented a mouthwash embedded with gold nanoparticles that can detect cancer of the head, neck, tongue, or throat. It’s said to be the first of its kind oral technology that can test and diagnose cancers without a confirmed surgical biopsy.

The gold mouthwash has been successfully tested in animals, and is now moving to human trials.

Gold nanoparticles have long been used for finding cancer cells, but scientists wanted to take the technology further and use them for oral detection. Combining physics and biomolecular technologies, the scientists were able to coat nano-sized particles (gold) with antibodies to react visually with specific antigens, like cancer cells.

Since, however, injecting gold nanoparticles into the body can cause unwanted side effects, the scientists focused their efforts on detecting surface cancers (head, neck, or mouth). Their gold solution can be brushed onto the skin or used as mouthwash.

The gold mouthwash test kit is reportedly safe and inexpensive, costing in the range of $200. Early discussions are underway with commercial partners, with hope it will be used regularly in a handful of clinics in Israel by the end of 2015.